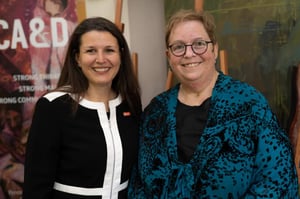 Mary Colleen Heil Day proclaimed in the City of Lancaster

Lancaster Mayor Danene Sorace proclaimed  today, June 1, 2018, as Mary Colleen Heil Day, at a dinner given by the PCA&D Board of Trustees in  honor of Heil, retiring president of Pennsylvania College of Art & Design. President Heil will retire June 30, after serving as PCA&D President for 25 years.

In addition to the proclamation by Mayor Sorace, President Heil was presented with declarations of thanks for her service to the community and state by Pennsylvania Governor Thomas Wolf, The Commissioners of Lancaster County and the former mayor of Lancaster Richard Gray. 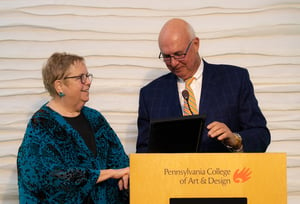 Robert Brandt, Jr., Chairman, Benchmark Construction Company  and Chair of the PCA&D Board of Trustees, announced that, in honor of her many years of dedicated service to the College, Pennsylvania College of Art & Design’s Board of Trustees is establishing the Mary Colleen Heil Presidential Scholarship. This half-tuition, renewable, scholarship will be awarded annually to an exceptional rising junior in honor of the long serving president of the Pennsylvania College of Art and Design, Mary Colleen Heil. 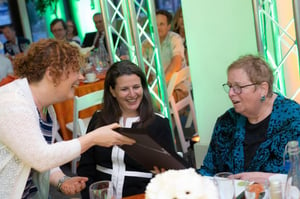 President Heil joined PCA&D as President in 1993 and has led the college through its development to an accredited College offering BFA degrees, and has overseen the College’s growth and increased presence in the region.  Through her leadership, the College grew from a little-known ten-year old diploma-granting art school to a nationally known 4-year professional art college. More about President Heil. 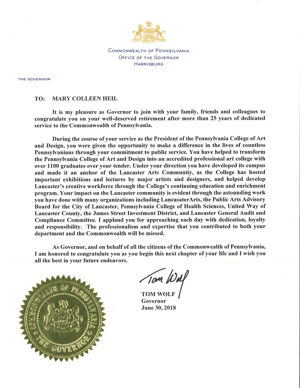 From the Commonwealth of Pennsylvania, Office of the Governor

You have helped to transform the Pennsylvania College of Art and Design into an accredited professional art college. Under your direction, you have developed its campus and made it an anchor of the Lancaster Arts Community. The professionalism and expertise that you contributed to both the College and the Commonwealth will be missed. I am honored to congratulate you as you begin this next chapter of your life and I wish you well in your future endeavors.

From the County of Lancaster

The Board of Commissioners is honored to present this Letter of Commendation to you in celebration and recognition of your many years of distinguished service. We are proud the highlight some of the notable achievements throughout your 25- year career as the President of the Pennsylvania College of Art & Design.

Lancaster County is extremely fortunate to have benefited from the countless contributions you have made over these many years. You have tirelessly given your time, talent and energy, along with your guidance and expertise to help improve the lives of Lancaster County residents helping to build a stronger community.

Earlier this year, Mary Colleen Heil said, “I love my work with the PCAD community. Not many people have had the chance to build an agile, relevant art college from the ground up. I’ve watched a generation of artists and designers launch careers here. A change in leadership will be exciting for the College.”

Michael Molla, Vice President Strategic Initiatives at Maryland Institute College of Art (MICA) has been named by the Board of Trustees as the next President of Pennsylvania College of Art & Design. Mr. Molla, who has served at MICA for a total of 26 years, will take the helm of PC&D on July 1. More about Molla.