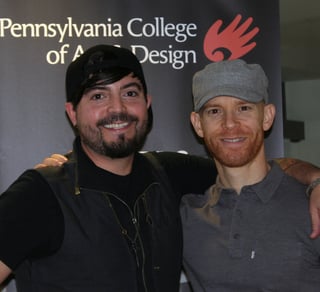 Maurice Caicedo, class of '98,  became interested in animation as a child when he saw Toy Story, and decided then that his career path would include 3D animation.  He didn’t know where to go to school to become involved in motion graphics, but someone told his father, “Send him to art school.”

Mo said he could have gone to a technical school, but his art school foundation in composition, anatomy and more has given him an advantage in his animation career, said Caicedo. 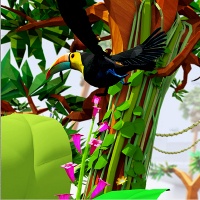 His animation foundation started at PSA&D with one class, making animations using flip books. Of his many memories of PSA&D, he recalled his illustrations for a classroom project, an entry in a Pennsylvania Department of Agriculture “Good Learners Need Good Food” contest. He won the contest and his drawings appeared on the aprons of lunch ladies across the state for years.

One of his classmates in the class of 1994 was Jon DiVenti (pictured above with Mo). PCA&D's co-chair of the Digital Media Department, who brought Mo to present an artist lecture at the College on October.

During Mo's years at PSA&D, he obtained an internship at Blue Sky Studios. “I paid my dues and learned so much. That’s where I learned 3D techniques.” Since then, his path has branched out to include visual effects, motion graphics and virtual reality. 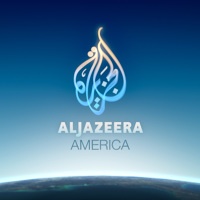 He freelanced for 16 years, working on projects that included Sponge Bob Square Pants, Aljazeera, Ortho, AT&T, Exxon Mobile, Trident, UnderArmour, Google, Reebok, Nike and Verizon. In freelancing he found that it was to his advantage that he worked as a generalist. He would throw himself into many situations, learning skills in the real world.

In his 15 years of freelancing, Mo has been an integral part of the creative process on projects for some of NY's leading studios, including Psyop, Shilo, Buck, Stardust and Mass Market. In 2006 Mo animated 'Darkside of the Moon' for Roger Water's (lead singer/song-writer of Pink Floyd) world tour.

Freelancing, Mo said, helped him make connections that would lead to his creation of his current business, Hey Mister, a full service production studio located in downtown Manhattan offering visual effects (vfx), computer graphics (cg), design, animation, post production, editing, and other services. Jon DiVenti drew a paperboy for the Hey Mister mascot and an illustration of the dog, Rocky, for which the studio is named.

One Hey Mister project was Alex Grey’s "Entheon,"  where he worked with the visionary artist himself as we co-directed this piece for his Kickstarter campaign. He helped to raise $210,000 after setting a goal of 125k, the second largest funded art project in Kickstarter history. He is currently working on a virtual reality adaptation of one of Alex Gray’s pieces, which will allow the viewer to enter the painting.

One function of the Hey Mister studio is design for the greater good. Mo also spoke about a non-profit he holds dear to his heart, Mythic Bridge http://www.mythicbridge.org , which provides hands-on, narrative filmmaking education to at-risk youth in NYC who are dealing with financial, emotional, physical, and/or situational hardships. While serving as a mentor for children living in Covenant House, a New York City homeless shelter, he led a 2 day workshop which resulted in an award-winning film made by the shelter’s youth.

Mo’s work has been featured on Motionographer, Stash Magazine, Boards, Creativity, Post Magazine, as well as a theatrical/cinematic release for his work on Nike's Shoxploitation campaign which is now a part of the Museum of Modern Art's permanent collection.

Mo says his computer is just a tool, just like a paintbrush and what he learned here has really helped. He encouraged PC&D students interested in animation, “It’s a good industry to be in – there’s a lot of work out there.” 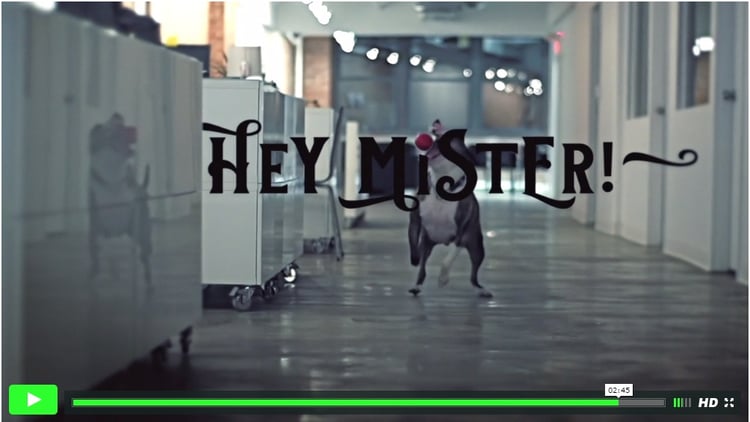 Alumni: Send us an update on what you are doing!