Painter of cityscapes in the classroom 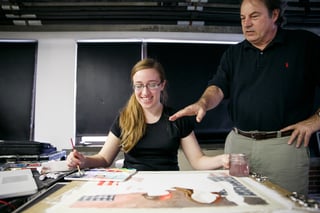 Eric Fowler has been documenting the everyday world through his paintings, as well as studying the field of American illustration, for over a quarter of a century.  Fowler, who has been teaching Illustration for two decades at PCA&D, brings his background into the classroom.

Fowler will be exhibiting his work “Edifice Rex” this May at the Red Raven Art Company, 138 N Prince Street, Lancaster. 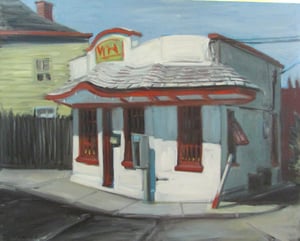 According to Fowler, “My paintings are a process based on observation, memory and a sense of place. I choose my subjects because they truly resonate within me. A familiar place seen anew or a newly discovered town when traveling. I see a dilapidated old house or some quirky building, and I want to capture it in paint. Its where light, form and time converge. Something special can happen. It triggers a response a need to a new painting.”

Fowler’s work has been compared to that of American painter Edward Hopper. While Hopper was considered a realist, Fowler, who considers himself a "Painter of Cityscapes," is also described as an expressionist, as his work is an expression of inner experience rather than solely realistic portrayal, as he seeks to depict not objective reality but the subjective emotions and responses that objects and events arouse in him. 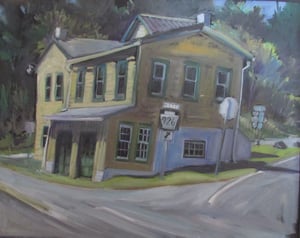 In addition to his work as an artist Fowler is also Collections Manager at the Society of Illustrators Museum of American Illustration, 128 East 63rd Street, New York, NY 10065.

Fowler brings his experience as a prolific illustrator and a curator of American illustration to the PCA&D classroom, where this semester Fowler is teaching two sections of History of Illustration and Emerging Trends. The course is an introduction to the evolution of illustration through the many cultural, technological, and economic influences that have shaped its development, and teaches sophomore students about the major artists, trends, and movements that helped to shape the illustration industry to what it is today. Specifically keyed studio projects give students a hands-on understanding of the changing visual vocabulary of this vast and ever changing field.

Fowler joined the PCA&D faculty in 1998, serving as chair of fine art from 2006 to 2007. Among many course, he has taught the Observational Figure Workshop, incorporating a variety of traditional and digital techniques, to guide senior students in using their knowledge of anatomy to develop expressive drawings and paintings using live models and photo reference.

According to Fowler, these paintings that he will be exhibiting at the Red Raven Gallery are part of a continuing series. “The subject matter may vary somewhat, but all share a strong focus on a buildings special resonance. Its more than light on the side of a white building. They are interesting places to paint, pure and simple,” he said. “The old crab shack is vernacular architecture. The idyllic small-town brick home speaks to me. I stop at a rural crossroads to capture great old structure leaning with age. Or I linger across from a charming street corner in Greenwich Village. These are paintings describe an aura, a paintings character. They are prime examples of special places staring back at us.” 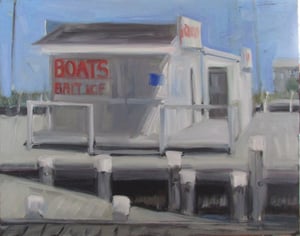 Red Raven Art Company will be hosting a reception on the evening of First Friday May 4th and during Lancaster City's Art Walk, May 5 and 6. Eric Fowler will be doing a painting demonstration on Saturday May 5, 11 a.m. to 2 p.m., during Art Walk. Red Raven Art Company is located at 138 N. Prince St., Lancaster, PA 17603, on Gallery Row.