Peter De Séve discovered his passion for art at an early age. He began drawing as a young child, inspired by the comic books he collected as well as science fiction and fantasy illustration. 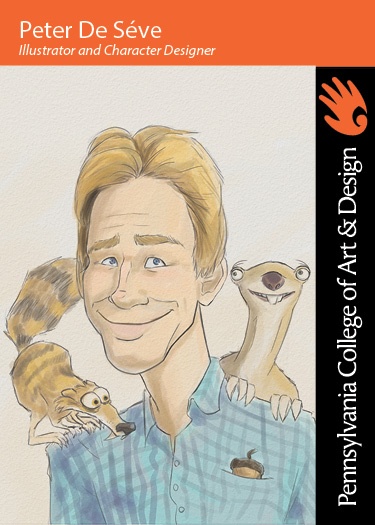 Since then, he has come a long way and has an amazing portfolio of illustrations created for The New Yorker, Disney, Blue Sky Studios, Totoro Forest Project and many more. De Séve uses fairy tales and animals metaphorically to liven up otherwise dry subject matter. Not only are his drawings phenomenal, but his ideas are incredible as well. Some of his best known works are the character designs for the Ice Age series, Mulan, A Bug’s Life and Finding Nemo.

In 2002, De Séve received the distinguished Hamilton King Award from the Society of Illustrators. His wonderful and humorous art work can be seen today in A Sketchy Past. This 240-page book is a collection of his finest work, all watercolor, and lots of fun sketches. He currently lives in Brooklyn, New York with his wife and daughter.