Allegorical interpretations by PCA&D professor on exhibit at City Hall 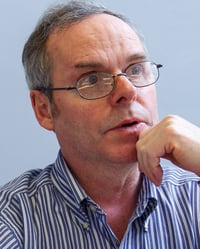 ALLEGORICAL PAINTINGS BY Thomas Scullin, Associate Professor, PCA&D’s Foundations Department, will be on exhibit in the Lancaster City Hall from May 3 through June 27. An opening reception will be held Frist Friday, May 6 from 5:00 pm to 8:00 pm.

Scullin is a proud Founder of and a fulltime associate professor, for 37 years, at Pennsylvania College of Art & Design in Lancaster, PA. Scullin has thoroughly absorbed Art History from years of teaching it as well as having travelled extensively in Europe. He received his BFA from the Ohio State University and his MFA from Pennsylvania State University. Soon thereafter he attended the Skowhegan School of Sculpture and Painting.

Scullin has had 15 one-person shows, the most recent being at the North Museum in Lancaster, PA. Some of his other one-person shows have been in the Jun Gallery and the Hahnemann University Gallery, both in Philadelphia, PA.

Scullin has participated in over 60 group or juried shows. He has won four First prize painting awards as well having been exhibited four times in the prestigious Butler Art Museum Midyear Show in Youngstown, Ohio. His most recent group show is titled "Four Artists" at the Lancaster Museum of Art.

Below are a few of the seventeen pieces on exhibit:

To the right is the young Louis XIV.  He and his mother had to flee Paris because of a rebellion in his youth.  As an adult, Louis established his court away from Paris, in Versailles.  He carried the notion of absolutism and the divine right of Kings to extremes, hence he has a halo.  Versailles became a monstrous monument to his ego that nearly bankrupted France.  Like the blind leading the blind, Louis XV and

Louis XVI continued this lavish lifestyle of Versailles until the citizens of Paris put an end to it.

The setting is the British Museum in London.  The British Empire was born from the Industrial Revolution, advances in science, and colonialism.  The English acquired vast wealth and treasures throughout the world. At the same time Darwin expounded evolution.  Today we can have genetic manipulation which can be potentially dangerous, which is represented by a mutant glowing form.

Paris is the city of love.   “The Death of Marat,” by David, has Marat accidently embracing Canova’s “Cupid and Psyche Standing”.  The revolutionaries of Paris wanted to raze the Notre Dame Cathedral.  Perhaps Marat’s death saved this Gothic masterpiece from destruction.

The early Germanic tribes were always a troublesome foe for the Roman Empire.   Among many circumstances, when Rome had to rely on German troops for defense, Rome fell.  The unification of Germany in the 19th century is represented by the Brandenburg Gate, which also became important as a landmark for many others of Germany’s important historical events. The 20th century saw Germany scarred by the First World War, Hitler, and the Berlin Wall.  Now in the 21st century, Germany is a peaceful and prosperous country.

The mad monk, Rasputin, spurred the fall of the Romanovs.  He is off to the left receiving his sordid mystical powers.  Lenin was smuggled into Russia by the WWI enemy Germans to undermine the Russian State.  The last of the Romanovs would soon become martyred, not slain by arrows (like St. Sebastian), but instead by a hail of bullets.

Napoleon captured Italy, and at one time held the Pope prisoner (symbolized by Leonardo’s “Virgin of the Rocks”).  Napoleon had the Pope attend his coronation, when Napoleon placed his regal crown on himself.  Napoleon’s megalomania led to temptations for far-flung attempted conquests that were defeats for his armies.  Over a million French troops alone died from these misadventures.