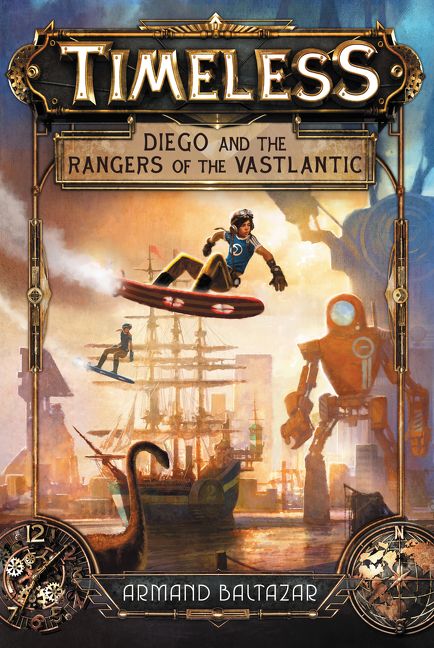 Armand Baltazar, of California, began his career as a background artist in animated film before moving on to serve as a visual development artist and then art director for studios such as DreamWorks, Disney, ImageMovers, and Pixar. You can find his work in films like "Brave," "Cars 2," "Inside Out," and "The Good Dinosaur."

Inspired by his son, Baltazar now has a new path. The author/illustrator and HarperCollins have released "Timeless: Diego and the Rangers of the Vastlantic," the first installment of a middle-grade adventure novel series. It's an epic tale featuring more than 150 photorealistic illustrations in its 600 pages. With kids from different time periods coexisting alongside robots, dinosaurs, time collision, and fantastical machines, how could it be anything but a grand saga?  "Like a midsummer action movie," The New York Times Review of Books says of Baltazar's work, "the scope (and budget) of the book is dazzling." The book has a deal to be adapted into a live-action/CG film.

Think of yourself as the protagonist of the greatest narrative you're already authoring and living. -- Armand Baltazar

PCA&D asked Baltazar to reflect not only on his career, but also on what he'd encourage PCA&D students to consider as they begin to think about what their own creative life might look like:

What is it about narrative painting that really grabbed your interest? At what point were you in your education when that really came to the forefront?

AB: I've always loved stories, and I especially loved paintings and images that accompanied them. It started started with a love of children's picture books, and then later classic illustrated adventure novels like "Treasure Island," and then comic books, graphic novels, and fantastic visual films. I loved doing all kinds of art in high school and afterwards I went to a state university and earned a degree in advertising illustration. After working in the field a short while, I found that that wasn't for me. I loved art that told stories and, with that realization, that I went back to school and studied to become a book illustrator. Ironically, that decision led me into a 20-year career in animation!

What's the process like of transferring that skill, on which you've built a varied career, into the written word? Were there skills you've developed in illustration that helped you bridge the two art forms of illustration/animation and writing?

In those disciplines we create from and are driven by the text, whether it be from a manuscript or script. In a sense, bridging a path to writing was reverse engineering the narrative image-making process  back to its foundation ... the written story. Writing is a skill and a discipline that, like drawing and painting, must be practiced, and worked at in a continuing journey of learning, applying, failing, and succeeding.

What do you think is a really valuable skill for art/design school students to develop that many of them might not think about until they've graduated?

AB: A great teacher of mine once told me that it is as important to have something to say with your skills as much as it is in mastering them. That piece of advice was the best thing I learned. It means the real measure of success and satisfaction in the artist journey comes from offering the world something unique to you that your mastery of skills enables you to give.

If someone came to you and commissioned you to illustrate *any* book or story of your choice -- for young children, middle schoolers, adults, really *any* age -- what book or story would you choose? Why?

AB: I would illustrate "Dune" by Frank Herbert. There are many fantasy and science fiction stories I love, but reading "Dune" in junior high was like seeing "Star Wars." It was an adventure that so completely immersed me in another world, history, and culture while exhilarating my emotions and imagination. It's what made me fall in love with the "great epic" narrative!

Are there any questions or challenges you'd like PCA&D students to be mulling over in advance of your talk and demonstration?

AB: I would ask them to consider what I spoke about in (the third question above): What was your dream in making art as far back as you can remember? What do you want to do with your art, and I don't mean what job do you want to have – dig deeper! Ralph McQuarrie of "Star Wars" and Syd Mead of "Blade Runner" were concept artists. That was their job title ... but what they actually wanted their art to do within the scope of that job was to show us the future and possibilities of what could be.
When I was a kid I wanted to create my own heroes, villains, and epic adventure like "Dune," like "Star Wars" ... then I grew up and used my art and what I learned from that to make that dream happen with "Timeless."

And I would ask the students to think of themselves as the protagonist of the greatest narrative that they are already living and authors of. My advice is to bring what they've learned and experienced from that ongoing journey with them every time they create art!