Corinne Carmiche '20 used her summer vacation from art school to take a crash course of sorts in public art in the real world: an internship with CITYarts, a New York-based public arts and education nonprofit.

CITYarts programs pair children and youth with professional artists to create public art in New York City. And, since its 1989 founding, CITYarts has gone global using local artists and volunteers. Youth on six continents, and in 81 countries, have created more than 6,000 works through CITYarts' Pieces for Peace Project.

When Corinne learned about the program, the Fine Art major says, it seemed a perfect fit.

A CITYarts crew reviews work on a massive mural in NYC.

"I was really interested in working more with the community," Corinne says. "My mom's an art teacher and she has this program ... that works with kids with special needs. So I've always been immersed" in working with young artists.

Corinne commuted from her New Jersey home for the two-month internship, which introduced her to new areas of the city and exposed her to the start-to-finish timeline of large-scale projects. She and her CITYarts crew painted picnic tables, started murals from scratch, even restored a well-known but weathered peace mosaic that fences in a soccer pitch.

For her first project, "they took me along on site to a school with metal detectors and security guards ... can you imagine (being a student and) going into a school and immediately walking into a negative environment like that? But there are a lot of lot of good aspects and they're trying to make it better," she says. "Here, they were painting on the doors of the school and really large canvases -- what their futures could be, and then bringing it all together into a cohesive piece." 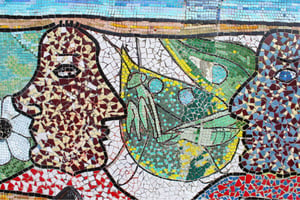 Over the course of the summer, Corinne was assigned to four or five sites, tackling all sorts of projects: photo and video documentation, working hand-in-hand with the lead artists on murals and mosaics, inventory and documentation for an art auction, website work, mentoring young artist volunteers on site, even scouting sites for future CITYarts projects.

But the job was especially rewarding, Corinne says, when she saw the look on the faces of student artists as they worked on the projects.

"When we were done, or during the process, they felt like they were doing something bigger than what (they usually can). Opening up the possibilities of, 'Wow, I didn't know I was good at this.'"

The job itself, Corinne says, "had its ups and downs like any internship." One of the plusses, she says, was that every day's tasks were different. "Some days I'd get to work with the artists and be their assistant, helping figure out what supplies they needed or directing the kids how to paint a certain way. I found that very enlightening," Corinne says. "And I did some graphic design stuff, which I never really thought I would do. I loved doing that, it was just really different -- a challenge."

Besides being a rewarding way to spend her summer break, Corinne says, there were long-term rewards, too.

"I loved working at a nonprofit," she says. "It solidified what I want to do" after school. 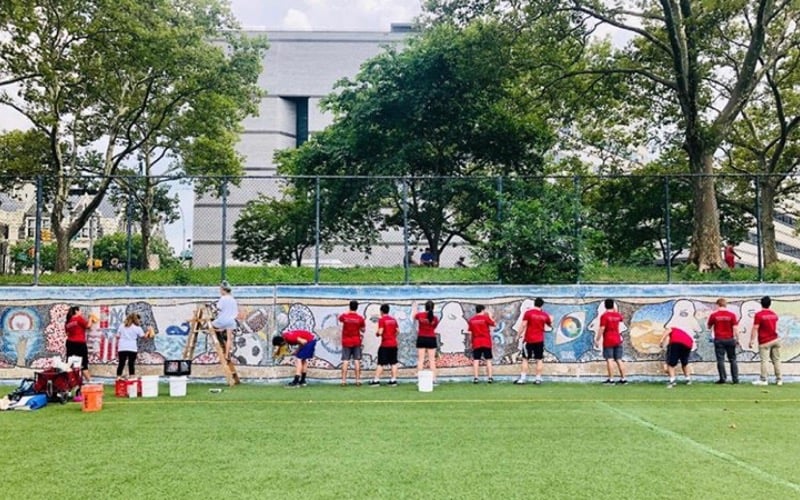 Refurbishing a CITYarts mural that borders a soccer pitch.