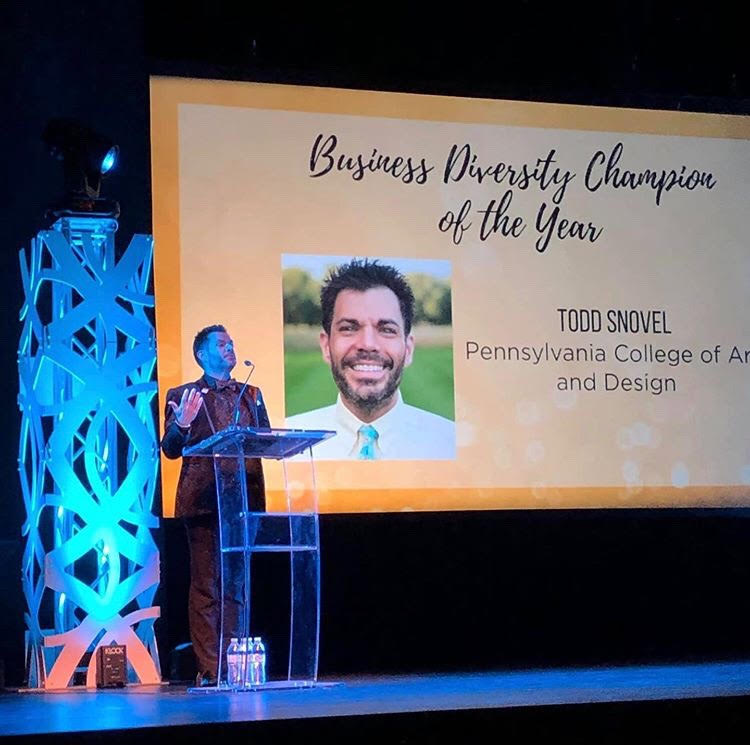 He was thrilled to accept the award, he says -- but not on his own behalf.

The award, Snovel says, "is on behalf of those brave Pennsylvanians who live in fear of losing jobs or housing, who are still facing the fear of those realities daily" in a state which offers no legal protections from discrimination to LGBTQ Pennsylvanians.

Snovel, Special Assistant to the President for Strategic Initiatives, joined the College in November, and has spent his career advocating for diversity and inclusion. The former Assistant Dean for Engagement and Inclusion at Lebanon Valley College, he most recently had been appointed by Pennsylvania Governor Tom Wolf to establish the nation’s first statewide Commission for LGBTQ Affairs.

A return to higher education

Snovel found that he missed contributing to an environment of higher education and, when the opportunity arose at PCA&D, he was eager to be considered for the role. Here, he says, his charge is straightforward: affirming the idea that the principles of diversity and inclusion aren't just buzzwords but are "centered in everything we do, from our daily operations to new initiatives through our strategic plan."

PCA&D, Snovel says, is the ideal place to put these principles into action.

"There's collaborative leadership; there's the challenge to be innovative," he says. "And while our traditional frameworks of leadership in higher education are, literally, dissolving -- we have to think about innovation.

"My big area of responsibility is the new strategic plan. It's really visionary. It's really stretching the College, and it's super-exciting." The goal, he says, "is to build (the College) into an amazing bastion, creating a community that supports innovative and entrepreneurial artists and designers and who champions these diversity and inclusion principles."

The roots and inspirations for his work, Snovel says, go back to moving to Central Pennsylvania, and then choosing to remain in the region for college and after graduation.

"I saw the growth and potential," he says, "but I also noticed the lack of diversity as we'd define it in so many ways. I saw how some organizations, sometimes without even realizing it, were maintaining the same structures that were further marginalizing people."

So Snovel's work, whether within organizations, businesses, or government has often been to listen: to listen to stories of people "who have found themselves often silenced in Central Pennsylvania, and to figure out how to break down silos and towers, to help people be seen in spaces, to challenge and change structures" that stifle the actual progression of diversity and inclusion efforts.

“Awards that honor work in diversity and inclusion are necessary but also challenging," Snovel says, "because we need to continue to do the work. There's so much more to do, and we all need to find our voice to keep moving the needle."