Throughout the year, the academic departments at PCA&D invite many nationally known artists to add to the curricular content for the students. Many of these are open to the public. The community is invited to join the College to hear about the work, practice and career of these exemplary artists.

These talks are held in PCA&D’s Atrium. There is no cost to attend these lectures. 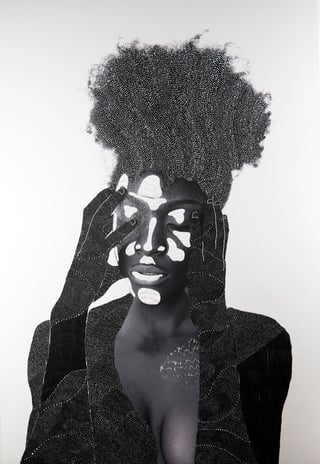 Nate Lewis, one PCA&D’s Mosaic Project Artists, is a self-taught artist, drawing inspiration from anatomy, physiology, disease processes and his nursing experience as a care taker of patients and their family members he creates stunning, intricate 2-3d sculptures out of single sheets of paper that visually combines the aesthetics of drawing, sculpture, etching, embroidery, and textiles. Originally from Beaver Falls, PA, Lewis now lives and works in Washington DC. His first career was that of a critical care nurse. www.natelewisart.com 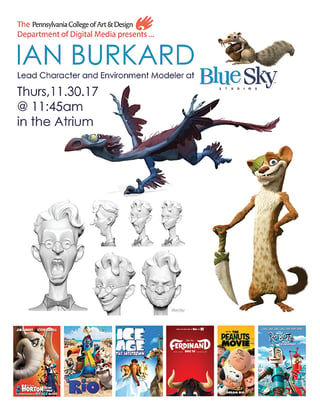 Guest of the Digital Media Department
Thursday, November 30th, 11:45 a.m.
Ian Burkhard from BlueSky Studios has produced characters and environment models at Blue Sky Studios for over thirteen years. His film credits include - Robots, Ice Age: The Meltdown, Horton Hears a Who!, Ice Age: Dawn of the Dinosaurs, Rio, Ice Age Continental Drift, Epic, Ice Age Collision Course, Rio II, Peanuts, Ferdinand, Spies, Nimona, and several other development projects. He is currently leading character development sculpts and technical character modeling for the feature film NIMONA.
Ian will be speaking about his career path, his work at BlueSky, and his personal creative endeavors. His presentation is scheduled for 11:45am in the Atrium. All are welcome!
Event Details

Guest of the Graphic  Design Department

The Onion, Adult Swim, Last Week Tonight with John Oliver, Full Frontal with Samantha Bee. For designer Daniel Spenser, these names aren’t just a list of the best satirists and comedians working today, they’re who he gets to write on the career section of his CV. Since finishing his BFA in graphic design from Purchase College, State Univ of NY, Daniel has found work as a designer, illustrator, and animator.

Guest of the Fine Art Department

Francine Kay Affourtit is a Philadelphia based artist, educator and arts organizer. She received her BFA from the School of the Art Institute of Chicago and her MFA from Tyler School of Art as a Temple University Fellow.

Francine's studio work concentrates on re-thinking the applications of printmaking to create sculptural installations and unique constructions from woodcuts. Francine’s activities outside the studio are fueled by a desire to build relationships with artists, communities and the public as a means of collaborative creation and transformative discourse.

Guest of the Photography Department

Friday, February 2, 10 a.m.
Web-cam performance artist Molly Soda’s work does not typically occur in a traditional gallery or museum setting, and may not even occur within a typical art context at all. All of her artwork resides online. She uses the internet as her medium. Soda has generated a significant online following, sharing her web-based performances across social media platforms including Facebook, Tumblr and Twitter. She will give an atrium talk at 10am, visit with the Photography students, and give critiques to the seniors in the afternoon. http://mollysoda.exposed
Event Details

Guest of the Digital Media Department

March 9, time to be announced

Armand Serrano is a Filipino-American animation artist who's known for his works at Walt Disney Animation Studio and Sony Pictures Animation. He has been in in the animation industry for more than 2 decades and currently serving as Visual Development artist for Walt Disney Animation Studio in Burbank, California. He is also known as a lecturer in the field of animation and design. He conducts workshops and demos internationally. Armand is also a seasonal adjunct professor at the Cinema and Media Arts Department of Biola University in La Mirada, California.

Armand started his career as an assistant animator at Fil-Cartoons, a Hanna Barbera studio based in Manila. His latest credits with Disney include the award-winning Big Hero 6, and Zootopia. Armand also does game concept designs and storyboards for TV commercials with clients that include Blizzard Entertainment, Blur Studio, Fisher Price, Reel FX, Laika House, Big Red Button, Charlex and 321 Launch.

Guest of the Illustration Department

Artistic Designer for Simon and Schuster - Children's and Young Adult division, Illustrator, Designer, Laurent Linn worked for Jim Henson's MUPPETS for over a decade where he won an Emmy for his work on Sesame Street designing and building the puppets. Just release his debut novel "Draw The Line” which is an illustrated novella on finding your real life super powers and learning how to use them.

Guest of the Graphic Design Department

“Life after PCA&D” Kaitie recently took on a new role at Snapchat as the lead designer and co-creative strategist for the upcoming Winter Olympics content, living exclusively on the platform.

Guest of the Illustration Department

Lindsey attended The Art Institute of Boston with the intention to major in animation.  However, she fell in love with painting science fiction and fantasy stories, and put all of her time and energy into the illustration department at AIB. She graduated magna cum-laude with a BFA in Illustration. Today, Lindsey spends almost all of her free time drawing and painting things that don’t exist.

Her work has appeared in multiple volumes of Spectrum: The Best in Fantastic Contemporary Art,  and some of her clients include Wizards of the Coast, DAW books, Penguin Books, Audible.com, Applibot, and Science Fiction Book Club.