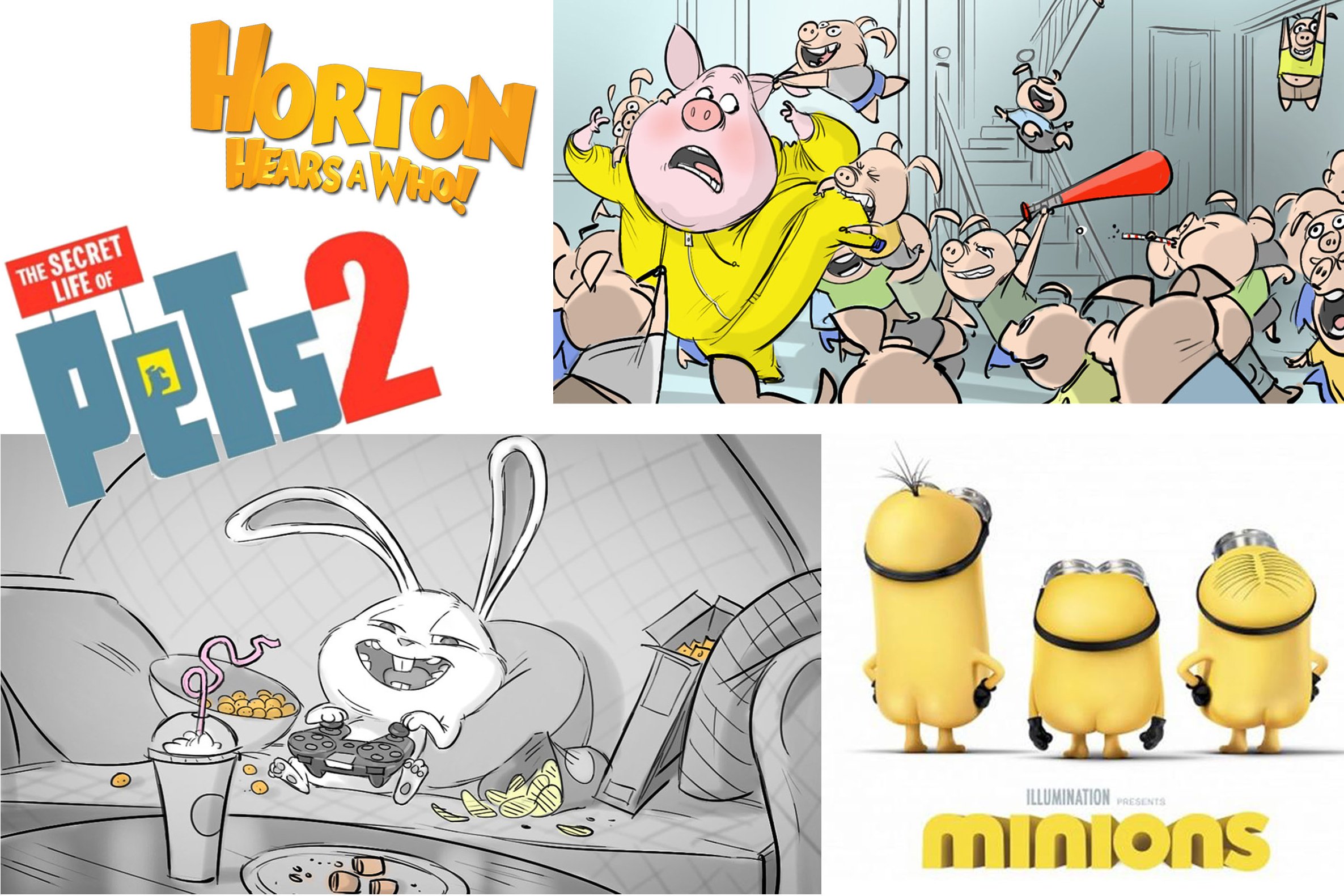 When Eric Favela graduated from Cal Arts, he knew he wanted to work in feature animation -- but, beyond that, he really wasn't sure where, or in what capacity.

Then he found his niche: in the story department of Blue Sky Studios. And, since then, he's expanded his career to include feature film storyboarding, visual development and short film direction. A feature film storyboard artist for 13 years, he now works for Illumination, a film and animation studio owned by Universal Pictures, and his skills have been an integral part of some of the most recognizable animated films in recent years:

Favela will visit PCA&D for an Artist Talk on Thursday, Nov. 14, at 11:30 a.m. in the Atrium. We asked him what challenges he's encountered as he's built his career, what students who are interested in animation should know about the field, and how artists can build their own creative journeys:

At what point during your time at Cal Arts did you know you wanted to focus on character animation? What sparked it?

EF: I began Cal Arts in 2002 and studied traditional 2D animation, back when students animated with actual paper. Other than knowing I wanted to be involved with feature animation in some capacity, I really had no idea what I specifically wanted to focus on when I started the program. To be honest, I didn't actually know what I wanted to focus on the day I graduated either. It wasn't until a couple weeks after graduation when I fortuitously landed a job with Blue Sky Studios in the story department that I said, "Okay, I guess I'm going to be a storyboard artist." As it turns out, I love it.

You've done storyboarding, writing, directing -- what appeals to you about these different roles? Does each challenge you in a different way? Does your work in one area influence how you work in another?

EF: Any new role I take on is influenced by previous roles. Every project holds new lessons for me to carry over into the next. As a writer, I can't help but think like a board artist because I'm visualizing everything in my head as I go. I'm seeing the shots, the camera angles, the colors, the tone. Then as a board artist, I feel like I can't help but think like a director because storyboarding a single sequence within a film is essentially like "directing" that sequence. Every board artist is able to put his/her own personal spin on a scene so it's essentially like directing on a smaller scale. When I've gotten to actually direct, there are WAY more moving parts and elements of the project that I'm responsible for. This obviously can bring more challenges but potentially allows me the most creative satisfaction.

What should students who want to go into this field understand about it, the particular challenges or rewards?
EF: The challenges vary from project to project and from studio to studio but one particular challenge that I've come up against is this -- sometimes when working on a film, a scene isn't working. So I am required to come up with ideas to to fix it ... and I do. And then those ideas don't work, so I need to come up with more. And those ideas don't work either. So I try again. And again. And on and on it goes, all the while people are depending on me and the deadlines become tighter and the pressure increases. And as an artist, I'm still expected to generate creative, fresh, funny, unique, original ideas when my brain feels fried and the strain of production time constraints feels like a gun to my head. And I've been working on the same scene so long that it's like when you say a word over and over until it loses its meaning.

Yes, that aspect of this field can be a little anxiety inducing. BUT... the satisfaction of finally solving the problem and cracking the scene, working on a film that I'm proud of, sitting down in a dark movie theater with friends, family, fellow artists, complete strangers, and collectively experiencing something on the big screen that was generated in the vast jumbled chaos that is my own brain ... there is nothing like it in the world. And it's worth it.

What's your dream project?
EF: In 1973, when "The Exorcist" was released, it was so scary for audiences that people were vomiting and fainting in the aisles. I'd like to achieve something equivalently scary but within the realm of animation. (For adults, obviously). I love scary movies.

What will be the focus of your artist talk here at PCA&D?

EF: I'm going to share art and stories from my own journey as an artist. I'll talk about various things I learned in art school as well as within the animation industry. I will also share tips and tricks for students to do on their creative journeys, how to aim for the jobs they want ... and generally things to avoid.