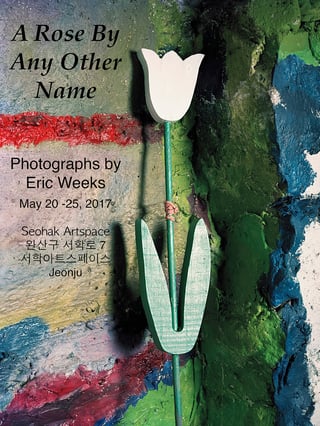 PCA&D Photo Chair Eric Weeks’s work is in a solo exhibition exhibition "A Rose By Any Other Name," at the Seohak Artspace in Jeonju, South Korea,  May 20-27, 2017, in conjunction with the 10th Jeonju International Photo Festival. He will be showing twenty photographs, ranging in size from 40 x 50 inches to 16 x 20 inches.

Artist Statement for A Rose By Any Other Name:

"A name… We give names to people, things, thoughts, and emotions to identify, categorize and differentiate. The photographic combinations presented here are metaphors about that process. These images ask the viewer to re-evaluate the meanings signified by the persons, places, plants and animals and consider the synapses that connect them. I invite the viewer to seek visual correlations that create new emotional and psychological associations.

"Visual groupings can function much like verbal language structure with images of nouns serving as subjects, verbs, objects, adjectives, and adverbs. The phrases here communicate complex ideas through pictorial means, rather than literal and linear methods. I am practicing an ancient language with modern instruments while simultaneously echoing today’s postmodern emoji-driven semantics.

"My work is concerned with photography's ability to describe specific details and to suggest open-ended stories. In this group of photographs, narrative is presented in each frame as well as between the various images. My goal with this body of work is to visually express the thoughts and emotions associated with struggle, loss, self-actualization, and liberation."

The exhibition contains a sub series "A Woman in White."

Woman in White: "Drawing inspiration from Wilkie Collins' mid-19th century "sensation" novel, The Woman in White, this eponymous suite of images continues a long-term process of photographing my wife Stacy in varying female protagonist roles. Themes of empowerment and women controlling their own fate can be found in Collins' work as well as my own. Although we are separated by over 150 years, the social issues remain constant over time.

"The color white has symbolized purity, innocence, virginity, and light in Western cultural productions from the Bible to cinema. In the early 20th century, the Suffragettes adopted white as a symbol of the women's rights movement. On the occasion of being the first woman nominated for the presidency of the United States, Hillary Clinton symbolically wore white at the Democratic National Convention in the summer of 2016."

Weeks joined the Photography and Fine Art department at Pennsylvania College of Art & Design as a professor in 2010. He earned his Master of Fine Arts degree from Yale University School of Arts and his Bachelor’s from School of Visual Arts.

Earlier this year, Week's short film with collaborator Joshua Reiman, The Wind Dies The Sun Sets, a contemplative consideration of energy extraction and use in Pennsylvania,  was selected as the winner of ikonoTV's open call for Art Speaks Out 2016, a curated video program about the environment. Weeks served as Exhibition Director for the 9th Annual Jeonju International Photography Festival, Jeonju, South Korea, held May 21-29, 2016. He was instrumental in creating a photography exchange,  between students at PCA&D in Lancaster PA, and Kyungil University (KIU) in Gyeongsan, South Korea in order for the photography students from the two cultures to learn about each other through photography, while also gaining an understanding of the communicative power of the medium.

In addition, Weeks served as a juror for Lancaster Summer Arts Festival's Expanded Visions exhibit, the Ware Center in June 2016. Week’s photograph “WGAL” was selected to be part of PA Modern: A Photography Exhibit of Midcentury Architecture, a juried exhibit for the 50th anniversary celebration of Pennsylvania’s State Museum and Archives Complex. In addition, his work has been shown in Dear Dave at the Foley Gallery, May 2015 edition of Fraction Magazine, Galerie Catherine et André Hug, Paris, EDS Galeria, Mexico City, Dartmouth College, Hanover, Wave Photogallery, Brescia, Italy, Scope International Art Fair, New York, Schneider Gallery, Chicago and the Demuth Gallery, Lancaster PA. His photographs are represented in the permanent collections of the Los Angeles County Museum of Art, The Art Institute of Chicago, The Museum of Contemporary Photography, Maison Européene de la Photographie and the Sir Elton John Collection, among others.  He received an Individual Creative Artists Fellowship Grant from the Pennsylvania Council on the Arts for 2007.