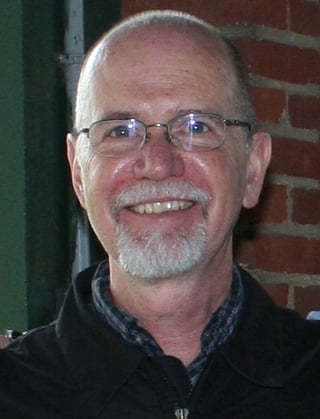 At the recent end-of-the year celebratory picnic for PCA&D students and faculty, Mary Colleen Heil, College President, expressed deep gratitude to David Moss, fine art faculty member who will be retiring at the end of the academic year following 33 years of service to the college and its students,

Moss said this point in his career is “Immensely strange and wonderful. I came into teaching because I wanted to continue to learn.” Following his retirement, Moss and his family will relocate to New Mexico where he will focus on his own art.

According to fellow faculty member Tom Scullin, “His teaching has always been tempered with a keen sense of the subtleties of art expression based on his refined abstract sensibilities. He has always extended a caring attitude that allows his students grow. Dave’s artwork has always been prolific as well as having evolved through time in many different directions.  As such, he has imparted his feel for the inner necessity of art and stamina for producing it to his students. His students have the same attitude that he has:  that one has to work hard, know what is out there, and develop one’s own unique artistic voice. Beyond all this, his character and personality has made his collegiality a pleasure to work with. He has always exhibited respectfulness and intelligence, and has been a constructive force in the development of PCAD.”

Moss’s knowledge of craft includes painting, three-dimensional forms, and digital pattern or texture work. He has taught in the Foundation, Fine Art, and the Interior and Environmental Design Departments throughout the college’s history.  Moss introduced digital motion art into the Foundation department and served as Chair of the Fine Art Department for many years and participated in many committees at PCA&D. In addition to his teaching, Moss was instrumental in the school’s early growth and contributed to the many self-assessments that led to PCA&D’s being conferred a BFA (in 1999) and accreditation by Middle States and NASAD.

Moss’s artwork is in the collections of the College, The Hamilton Club Lancaster, Whitaker Center for Science & the Arts, Harrisburg, PA, Armstrong World Industries, Lancaster, PA, among other locations. He has exhibited throughout Pennsylvania and New York and has won multiple awards including a Pennsylvania Council on the Arts Fellowship Grant and at the 2002 Pennsylvania Art of the State Exhibition. His own artist’s website is http://www.davidmossportfolio.com/

Moss holds a MFA in painting from Syracuse University. In addition, he holds a Diploma in Fine Art from the York Academy of Arts and a bachelor’s degree from Millersville University of Pennsylvania in Liberal Arts studies. Moss had also worked in design at Armstrong World Industries.