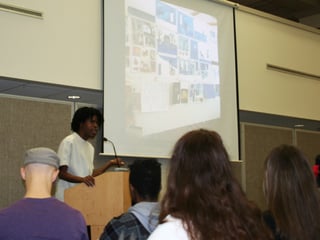 At this morning's Artist Talk at Pennsylvania College of Art & Design, award winning illustrator Christian Robinson, San Francisco spoke about his journey as an artist to PCA&D students and members of the community.

Robinson, now living in San Francisco,  said of his childhood, living with multiple cousins in his grandmother's one-bedroom apartment in Los Angeles, "We has limited space and limited means, but an abundance of love."

Drawing and making pictures was his way of making space for himself in a place where he couldn't control his environment. As an animation major at California Institute of the Arts, he found animation more stressful than fun. However, what he did well was the illustration behind the animation. He's grateful for his animation training, he said, because it has helped bring his characters to life,

Following his graduation with an animation degree from Cal Arts and an internship with Pixar Studios, Christian Robinson said, he went through a wandering period, sometimes working on some animation projects or teaching art to children, and sometimes working in non-creative jobs. Through it all, he made an effort to always be creative and make things.

He said that children's book publishing is improving somewhat, but including issues of race "is still messy. If there's a lack of people of color in books, those that are there send a stronger message."

Throughout his work, and throughout his talk this afternoon, there is a sense of positivity and playfulness. When asked about how he kept from getting discouraged during his early career, he replied, "It was a challenging time, I didn't have a way to deal with it and the anxiety stayed with him. But it was important to me to keep doing what I love."

Christian Robinson is an illustrator likes to tell stories with pictures, making a living as an illustrator and animator in San Francisco.  He’s worked with Pixar Animation Studios, The Sesame Street Workshop and illustrated a number of award winning picture books including Josephine by Patricia Hruby Powell (Chronicle), which won a Coretta Scott King Illustrator Honor, a Robert F. Sibert Honor; and Gaston by Kenny di Pucchio (Athenum), which was named a Best Book of 2014 by Horn Book, Kirkus, and Amazon.  His latest book, Last Stop on Market Street by Matt de la Pena (G. P. Putnam’s Sons), is a New York Times bestseller. See Christian’s work online at theartoffun.com, or follow him on Instagram: @theartoffun 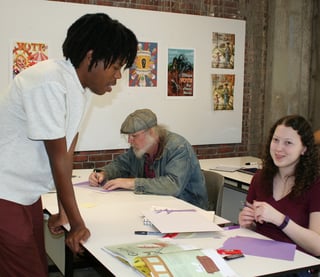 The other artist for this year’s Mosaic Project, Jamea Richmond-Edward’s work has garnered the attention of art critics including in the Washington Post and the Huffington Post’s “Black Artists: 30 Contemporary Art Makers Under 40 You Should Know”. Jamea has exhibited her artwork nationally and internationally including the Delaware Art Museum Centennial Exhibition, Wilmington, Delaware; Rush Arts Corridor Gallery, Brooklyn, NY; Parish Gallery, Washington, D.C. and Galerie Myrtis, Baltimore, Maryland. Her works are in the permanent collection of private collectors across the country and the Embassy of the United States in Dakar Senegal.