He designed postage stamps the US Postal Service depicting Judy Garland stamp and Hattie McDaniel, which were both issued in 2006. He is also the illustrator of the covers of the popular The Hunger Games trilogy.

"My description is conceptual realism with a leaning toward the slightly idealized," said O’Brien during an interview by The Illustrators Guild of Ireland in 2002. He was selected in 1999 and 2000 by Irish American Magazine for their list of top 100 Irish Americans. 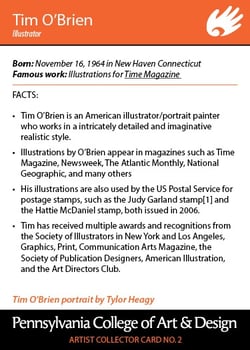 Born in 1964 in New Haven Connecticut, he earned a Bachelor’s of Fine Art (BFA) degree from Paier Collge of Art, New Haven. He now lives and teaches in Brooklyn, NY.

His blog http://www.drawger.com/tonka/ often features the thought process behind his commissioned illustrations, such as Napoleon for Smithsonian.