Diego Rodríguez de Silva y Velázquez (June 6, 1599 – August 6, 1660) was a Spanish painter who was one of the most important painters of the Spanish Golden Age. As a child in Seville, he showed early artistic promise and at the age of 11, he began study under Francisco de Herrera. Within a year, he apprenticed with Francisco Pacheco and remained there for five years.

In his late teens, he was producing reputable work, including paintings of sacred subjects, such as the Adoration of the Magi, and lighter scenes, such as Old Woman Frying Eggs.

In 1622, he went to Madrid, with letters of introduction to Don Juan de Fonseca, also from Seville, who the King’s chaplain. Later that year, the death of the king’s portrait painter led to an invitation by Count-Duke of Olivares, aide to Philip IV to submit his work for consideration. Olivares and the king were pleased and Velázquez, now admitted to the royal service, moved permanently to Madrid with his wife Juana Pacheco, the daughter of his teacher, and his daughters.

In addition to portraits, be was also commissioned by Philip to paint significant historical events, such as The Surrender of Breda, depicting the defeat of the Dutch by Spain. Other work during this time period includes Baccus. 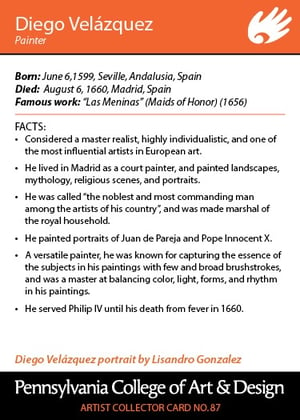 In 1649, Philip assigned Velázquez the task of founding of an academy of art in Spain. Velázquez was sent to Italy, where he created portraits of many Italian nobles, culminating in his famous portrait of Pope Innocent X. Returning to Milan, Velázquez painted some of his most renowned works, including Las Meninas, a painting, completed four years before the artist’s death, including the young princess Margaret Theresa and others in a complicated depiction of life at the court. It is considered an outstanding example of European baroque art. Velázquez was knighted by Philip three years later.

One of his final works was Las Hilanderas (The Spinners), painted circa 1657, a depiction of Ovid's Fable of Arachne. In 1660, Velázquez was charged with the decoration of the venue for the marriage of Maria Theresa with Louis XIV, on a small swampy island in the Bidassoa. On June 26 he returned to Madrid, and on July 31 he was stricken with fever. He died on August 6, 1660. Eight days later, his wife Juana also died. They are buried in at the church of San Juan Bautista, Madrid.