Aaron Blaise urges the Class of 2017 to be persistent

Acclaimed animator Aaron Blaise, speaker at today's commencement ceremony, spoke to PCA&D's class of 2017 and likened life to the sometimes slow and tedious process of animation, where each frame of your career and life moves slowly. "It's only later when you look back that you see the magic."

Blaise, whose love of drawing animals led him to illustrating the Beast for Disney's Beauty and the Beast, as well as many other iconic Disney creations, urged the graduates to be persistent in pursuing their vision. "One thing that will not change us as artists is the persistence to create." He shared his path from a rural boy in Florida who loved to draw animals to having his work nominated for Oscars while at the Disney Studios. "Disney was such a great experience for a kid who grew up in a trailer in the Florida swamps."

Along with persistence, Blaise talked about artistic vision, and how he temporarily lost his when his wife passed away. But he still wanted to create and eventually moved forward, although leaving the Disney Studios.

He eventually created a start-up company which revived Aaron’s painting career and launched a new website The Art of Aaron Blaise, teaching others the satisfaction he has found drawing animals.  "Things will happen in your life," he said. "Creatively, I am happier than I have ever been. Everything will change, but the one thing that won't is that persistence to create beauty."

Tom Scullin, retiring founding faculty member at PCA&D, was also lauded at commencement. Bill Mammarella, Chair of Fine Art, "Tom Scullin is a man who likes to get things done."

Mamarella continued, "Tom is like one of the Titans of old, who created the foundations on which we operate. He has his own standards. He served on the board of trustees, did payroll, and was involved with student housing, while he also shoveled bird guano off the rafters of one of the first buildings and shoveled snow from the entrance."

"Every year, at first, I would hear the same story from the students. They were perplexed, they might share stories between each other about their Design teacher who inexplicably wrapped his own head in masking tape. But without exception, year after year, by the end of the semester, these same students would invariably talk about Scullin with affection and respect as a teacher who taught them a great deal. Tom was continually updating his projects, and adding to his example reserves. He was paramount in the department’s shift to more digital tools, teaching himself Illustrator and animation software, and integrating it into the classroom."

Mammarella continued,  "Tom is also one of the most prolific artists I have ever known. Tom is the only artist I have ever known who can paint in 15 minute spells. I mean if Tom has a spare 15 minutes in between other tasks, he can go to his studio and paint for that short stretch and then go back to whatever else he was doing. Because, of course, why waste 15 minutes."

"It is his energy, his enthusiasm, and his dedication that built this college. Without Tom Scullin there would be no Pennsylvania College of Art and Design. We all owe Tom our gratitude and respect for making possible everything our college can achieve now and in the future," said Mamarella.

Mary Colleen Heil, PCA&D President and David Buckman, Chair of the Board of Trustees, presented Scullin with a sculpture in appreciation of his service.

Prior to Marc Torick, Academic Dean, conferring the Bachelor of Fine Art Degrees to the graduates, Jessica Edonick, Dean of Student Services, and department chairs presented awards to members of the Class of 2017: 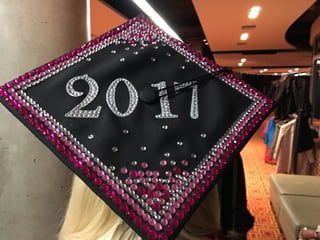 The ceremony exuded the pride the College has of its students. David Buckman said, "We know how much the College demands of you and how much of yourselves you put into your work to arrive at this occasion."

It also contained lighthearted celebration. As Mary Colleen Heil said, "My observations over the years is that yours is a class of thoughtful, hard-working, committed artists, designers and entrepreneurs who also know how to collaborate, support each other and have fun."

This celebratory spirit will continue tonight at the Senior Show and Celebration, when the Class of 2017 exhibits their professional-level senior thesis projects. In addition, one piece of work from each graduating senior will be on display in PCA&D’s Main Gallery. The public is invited to attend 5 - 8 p.m.

Families are invited to join their graduates for an exclusive look at the Senior Show from 4 – 5 p.m. The Senior Show & Celebration will then be open to the public from 5 to 8 p.m. The community is invited to meet the artists, view the artwork and enjoy live music and refreshments. Many works are for sale at this event.